Book Announcement: Agents of World Renewal: The Rise of Yonaoshi Gods in Japan 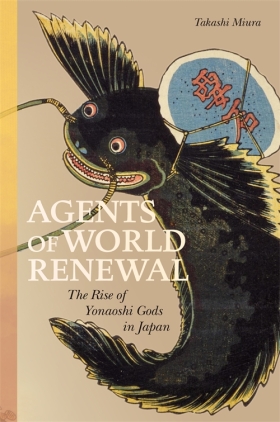 AGENTS OF WORLD RENEWAL: THE RISE OF YONAOSHI GODS IN JAPAN
Takashi Miura

This volume examines a category of Japanese divinities that centered on the concept of “world renewal” (yonaoshi). In the latter half of the Tokugawa period (1603–1867), a number of entities, both natural and supernatural, came to be worshipped as “gods of world renewal.” These included disgruntled peasants who demanded their local governments repeal unfair taxation, government bureaucrats who implemented special fiscal measures to help the poor, and a giant subterranean catfish believed to cause earthquakes to punish the hoarding rich. In the modern period, yonaoshi gods took on more explicitly anti-authoritarian characteristics. During a major uprising in Saitama Prefecture in 1884, a yonaoshi god was invoked to deny the legitimacy of the Meiji regime, and in the late nineteenth and early twentieth centuries, the new religion Ōmoto predicted an apocalyptic end of the world presided over by a messianic yonaoshi god.

Using a variety of local documents to analyze the veneration of yonaoshi gods, Takashi Miura looks beyond the traditional modality of research focused on religious professionals, their institutions, and their texts to illuminate the complexity of a lived religion as practiced in communities. He also problematizes the association frequently drawn between the concept of yonaoshi and millenarianism, demonstrating that yonaoshi gods served as divine rectifiers of specific economic injustices and only later, in the modern period and within the context of new religions such as Ōmoto, were fully millenarian interpretations developed. The scope of world renewal, in other words, changed over time.

Agents of World Renewal approaches Japanese religion through the new analytical lens of yonaoshi gods and highlights the necessity of looking beyond the boundary often posited between the early modern and modern periods when researching religious discourses and concepts.

1 Response to Book Announcement: Agents of World Renewal: The Rise of Yonaoshi Gods in Japan