The recent launch of the The Barbara Curtis Adachi Collection provides a wonderful resource for those interested in traditional Japanese performance arts. The collection was given to Columbia University in 1991 by Barbara Curtis Adachi, a long-time bunraku theater enthusiast who spent decades in Japan working with the Japanese National Bunraku Troupe. Now digitized, her donations provide a visual guide to puppet theater’s modern performance tradition.

The site is divided into several sections. At the outset, it includes short essays on bunraku’s historical context, the texts used in the performance, and audio files on the music and narration that accompany the performance, all of which provide useful background information for those unfamiliar with this particular performance art. 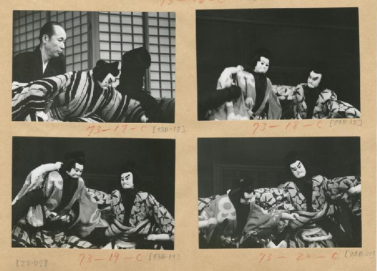 The Special Features section contains two parts, the first of which is an Albums section containing 50 digitized notebooks full of notes on, photographs of, and pamphlets from bunraku performances. Many of these also include scans of negatives from old rolls of film taken during shows, and the photos capture lively scenes of actual performances.

Metadata for each page within the albums cross-references plays, playwrights, locations, players, and other important information so that you can look to the tags to compare particular performances or appearances across the decades, searching out individual writers, actors, plays, scenes, or even architectural features visible in the photos.

The Realia section includes a variety of objects connected to performance, from the actual narrator’s scripts used during each play to dress and puppet limbs, photographed from different angles in high resolution. These objects provide a wonderful glimpse into the materiality of performance, including well-worn narrators’ outfits!

There are also visualizations of information about writers and performers (bar graphs, force-directed network, and dendrogram) formed from the database entries. These are also tagged so that you can cross-reference them with the various forms of media within the collection and see how producers, actors, and characters interconnect.

There are numerous ways to search the material in this collection, so those with specific needs will find it a useful compilation and archive. The Barbara Curtis Adachi Bunraku Collection represents an incredible and intimate assembly of knowledge on Japanese puppet theater that is definitely worth perusing.