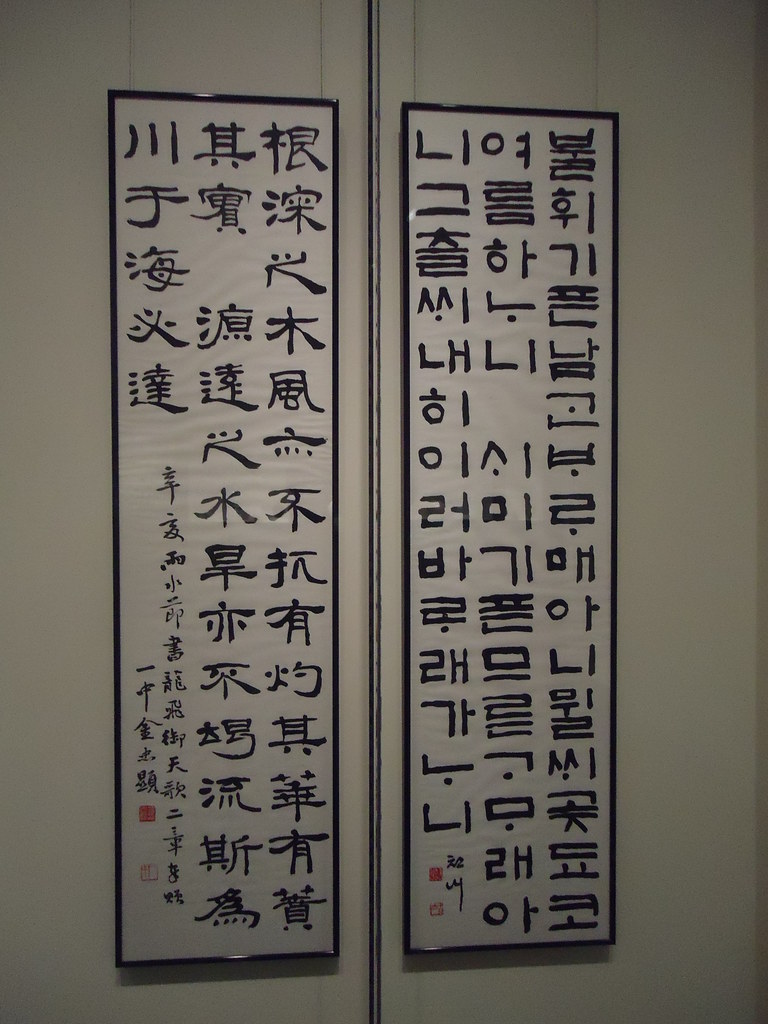 We have posted a number of times here on Shinpai Deshou about the Inter-University Center (IUC) program in advanced Japanese, based in Yokohama. It is surely one of the best advanced intensive Japanese language programs out there; they have also for many years had sister programs in Beijing (IUP), and in Taipei (ICLP), for Mandarin Chinese.

They now have a sister program for Korean language, as well, the Inter-University Center for Korean Language Studies hosted at Sungkyunkwan University (SKKU) in Seoul.

Right: Calligraphy by Kim Chunghyon, 1971. Seen at the San Francisco Asian Art Museum. Photo my own.

Like the Japanese and Chinese programs, the Korean IUC program is aimed at graduate students, researchers, and professionals who already possess a high level of Korean proficiency, and are looking to advance their language skills even further. Applicants are expected to possess level 4 or higher proficiency on the TOPIK, or to have taken at least four years of Korean language (post-secondary school).

As with the Japanese and Chinese programs, the classes are small (less than 8 students per classroom), and the focus is on improving reading comprehension for students’ individual fields of study, improving communication skills (esp. in order to facilitate better engagement with Korean colleagues & counterparts), and improving students’ Korean-to-English translation abilities.

Practicing and advancing speaking & listening skills is central to the program, and students will spend considerable time on this in classes. There are also opportunities for language exchange with SKKU students, as well as a series of special lectures from guest speakers. IUC students will present on their research, in Korean, at the end of the program.

Attention is paid to academic Korean language, including both reading & writing academic materials in Korean, considering the structure of Korean academic journals & academic writing conventions, etc. The program includes instruction in Hanja (Chinese characters) – and not only in the phonetic hangul – and there is additional optional instruction in Hanmun (literary Chinese) available.

Interestingly, unlike the Japanese program, which runs for a full 10-months from Fall through Spring, the Korean program is divided into Fall & Spring, with students being invited to attend for either of the two semesters, or both, in any order (i.e. you could attend Spring and Fall, instead of Fall then Spring). There is also a six-week summer program.

The above is based on my paraphrasing of a pamphlet obtained at the Association of Asian Studies conference held at the beginning of April this year, in Seattle. For more information, including application process, deadlines, and application forms, see the program’s course description at UCLA’s Center for Korean Studies website.

I am a scholar of Japanese & Okinawan history with a particular interest in the history of arts and culture, and inter-Asia interactions, in the early modern period. I have been fortunate to enjoy the opportunity to live in Okinawa for six months in 2016-17, and in mainland Japan on multiple occasions, including from Sept 2019 to now.
View all posts by Travis →
This entry was posted in language schools and tagged Inter-University Center for Korean Language Studies, IUC, skku, Sungkyunkwan University. Bookmark the permalink.