Information from the Illinois Japan Performing Arts Network website. This is a chance to see traditional Japanese performance that’s not to be missed! 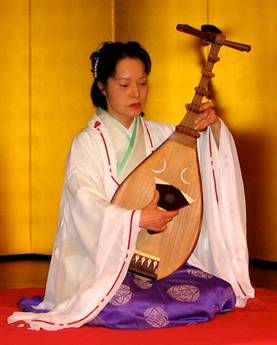 The elegiac melodies sung to the accompaniment of the biwa mourn and celebrate the warriors who gave their lives in the cataclysmic Genpei War (1180-1185), a civil war as traumatic for its times as the Asia-Pacific War was for ours.

On April 29, in the tradition of medieval performers who traveled throughout Japan reciting, singing, and memorializing the disquiet of war, its heroism and its folly, Yoko Hiraoka will perform three of the most famous and moving passages from The Tale of Heike —the 14th century compendium of elegiac tales—the opening “Gion Shoja,” and the battle scenes of “Ichinotani,” and the climactic “Dannoura.”

A native of Kyoto, Yoko Hiraoka is a senior master performer of Biwa, Koto, Shamisen and Jiuta voice. In addition to classical and modern training in koto and shamisen music, Ms. Hiraoka studied Chikuzen five-string Biwa for many years with Kōka Suga, the head of Kōmyōji-ryū Chikuzen Biwa and direct disciple of Yamazaki Kyokusui, honored as a Living National Treasure by the Japanese government. She has performed at the Art Institute of Chicago, Princeton University, Yale University, UCLA, Bowdoin, Smith and Colby Colleges, and many other major universities and music festivals throughout the country. Ms. Hiraoka currently teaches at Naropa University in Boulder, Colorado.