Road Map to a Military Decision

So I promised everyone in my previous post a look into using your Japanese Studies major in the military…well, I’m going to back up a few paces before we dive into that pool.  Naturally, you have to first decide which branch you want to get yourself into, Navy being my personal choice.  If you don’t want to go Navy, that’s fine.  One of the other services might be a better fit.  Here, however, I will articulate my own decision process.  Again, I’m your foil.  Do this for yourself.  And don’t be freaked out if you decide to go Army instead.  There are opportunities for you that way too!

view of Newport Bridge from where we were training

Picking a service is a bit like what I would imagine joining a fraternity is like.  You read about each, figure out what they stand for, outline your likes and dislikes, and then go for the best fit.  Notice how I’m considering each service as a whole I’m not focusing on designators.  In the case of the Navy, you have three choices to get in, but only one chance at each option.  Don’t sell yourself on becoming a Supply Officer because it just might not pan out that way.

First I determined which I was interested in just on a gut feeling.  The Marines and I weren’t going to work out and the Coast Guard was too domestic for my taste, so Army, Navy, and Air Force it was!  I contacted recruiters for each (friendly hint: the Navy and Air Force have senior enlisted specialized in recruiting officers, the Army does not.  You can go to any Army recruiting station for officer programs, the Navy and Air Force cover very broad ranges, so don’t be turned off if you discover your recruiter is a distance away.  Mine was three hours to the north!).  My prime questions were these:

After speaking with recruiters, I came up with a preliminary list of my top three choices:

The prospect of attending two basic trainings was just too much for me.  Here’s another note, for your consideration: always doubt a recruiter who tries to get you to enlist.  I met one girl who was convinced it would take her years to finally make it to officer training so she had opted for enlisted.  Now, it will actually take her years.  Enlisting is not necessarily a bad thing either.  It’s a lot more technical training into specific abilities than officer corps.  As an officer, your big thing is leading and I really just wanted to be a leader.  Long story short, I decided against the Army.  It looked very likely that I would be spending time as an enlisted soldier and not an officer.  And I do like to lead….

Navy or Air Force, Air Force or Navy, I just couldn’t decide.  Without picking just one, I moved right on to step number two….

Filling Out Your Applications

I contacted both recruiters, again, and said I’d like to start filling out the paperwork.  Each recruiter will have a slightly different way of proceeding, but essentially it’s all the same.  You answer a bunch of questions, write an essay about your motivations, and pick out your desired career paths.  Again, for the Air Force and Navy, that’s three possible designators; the Army is ten.  Since I ended up Navy, let’s just focus on that:

For the Navy, your package goes to each individual board, held usually once a month with a few exceptions.  The Air Force holds its boards biannually, and it is separated between aviators/navigators and everyone else.  Army is just one big onslaught, so far as I can tell.  At the end of the year, it is very common for boards to be cancelled, so prepare for that.  That happened to me.

In some cases, you will be required to interview with an officer of one of the corps you selected.  I had to do that with a Supply Lieutenant.  Now, Supply might not seem to have the biggest link to Japan, but, when interviewing, it is essential to emphasize that you are the right choice.  What follows is a pep talk for you before you walk in to interview. 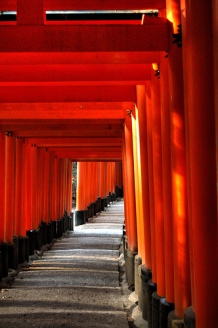 Let me start with one massive argument for the good old fleet.  LOTS OF JAPAN!  Hello, we kind of have this agreement with them that necessitates the presence of our military, and the Navy just so happens to be a big part of that.  Separately, Intel often requires area studies expertise, Surface Warfare means being the symbol of a ship, and Supply goes with knowledge of a port’s resources and shortcomings for the rest of the crew.  All require a set of excellent people skills, an open mind, and an affinity for research, all or a combination of which a language studies major can easily obtain.

Let’s say you’ve gotten your results back and you didn’t get your number one choice.  Not a problem.  Remember what I said about being an officer first?  Well, that really comes in to play here.  Not everyone can get their first choice, because that is not always the best fit.  I have met so many people who love the idea of doing intelligence, but here are some detriments as I see it: there is a lot of research, you spend a lot of time briefing, and you are almost always solo.  If you get stage fright easily or detest spending all your time reading news articles, then maybe Intel isn’t right for you.  But if you enjoy working in groups on very productive assignments, Surface Warfare is a good fit.  Take what you get and run with it.  Never see it as a setback.  If you really wanted to be an Aviator, you could always try to transfer later on.  By then you might love where you are anyway.

In the final hour, what finally swayed me towards the military was all the opportunities available afterwards.  You are obligated to serve a minimum of four years active duty, four years in the reserves.  It can get more complicated than that, so don’t tie me to it.  Afterwards, your life is very open.  You’re eligible for a GI Bill and can go off to pursue higher education as you see fit.  OR you can stay in and realize that a big part of getting promoted in the military is getting higher and higher degrees in a variety of disciplines.  Bonus:  the military pays for it.  So you’re getting job experience and an education, all while serving your country and getting paid.  You can call it a little idealist, if you like, but it’s the truth.  I am now eligible for training that many of my civilian counterparts will never be able to afford, and I get to travel the world.

Anything that you want to accomplish in life can be done with a military background, especially with an officer insignia.  Lots become leaders in business and politics and end up working all over the world.  They develop skills while serving as officers that are invaluable when dealing with a wide variety of people in a span of capacities.  Your ability to adapt to living abroad in Japan could really come in handy on a number of playing fields because not everyone has that overseas experience.  You can get while serving, sure, but it’s even better coming in with that background.  It’s an excellent opportunity for management experience.   And, yes, it looks just great on a resume.

Katie McDaniel graduated from Gettysburg College with a BA in Japanese Studies and a minor in Political Science (2009).  After working a year with ESE elementary students, she was commissioned an officer in the Navy through Navy Officer Candidate School (OCS).

2 Responses to Road Map to a Military Decision