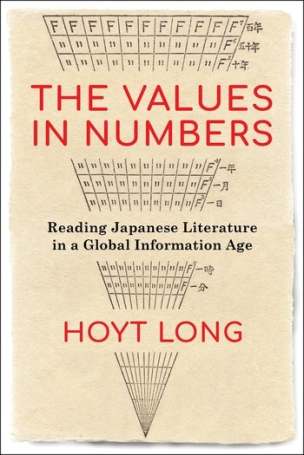 Ideas about how to study and understand cultural history—particularly literature—are rapidly changing as new digital archives and tools for searching them become available. This is not the first information age, however, to challenge ideas about how and why we value literature and the role numbers might play in this process. The Values in Numbers tells the longer history of this evolving global conversation from the perspective of Japan and maps its potential futures for the study of Japanese literature and world literature more broadly.

Hoyt Long offers both a reinterpretation of modern Japanese literature through computational methods and an introduction to the history, theory, and practice of looking at literature through numbers. He weaves explanations of these methods and their application to literature together with critical reflection on the kinds of reasoning such methodologies facilitate. Chapters guide readers through increasingly complex techniques while making novel arguments about topics of fundamental concern, including the role of quantitative thinking in Japanese literary criticism; the canonization of modern literature in print and digital media; the rise of psychological fiction as a genre; the transnational circulation of modernist forms; and discourses of race under empire. Long models how computational methods can be applied outside English-language contexts and to languages written in non-Latin scripts. Drawing from fields as diverse as the history of science, book history, world literature, and critical race theory, this book demonstrates the value of numbers in literary study and the values literary critics can bring to the reading of difference in numbers.