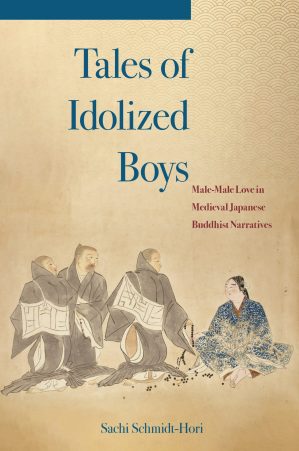 In medieval Japan (14th–16th centuries), it was customary for elite families to entrust their young sons to the care of renowned Buddhist priests from whom they received a premier education in Buddhist scriptures, poetry, music, and dance. When the boys reached adolescence, some underwent coming-of-age rites, others entered the priesthood, and several extended their education, becoming chigo, or Buddhist acolytes. Chigo served their masters as personal attendants and as sexual partners. During religious ceremonies—adorned in colorful robes, their faces made up and hair styled in long ponytails—they entertained local donors and pilgrims with music and dance. Stories of acolytes (chigo monogatari) from the fourteenth to sixteenth centuries form the basis of the present volume, an original and detailed literary analysis of six tales coupled with a thorough examination of the socio-political, religious, and cultural matrices that produced these texts.

Author Sachi Schmidt-Hori begins by delineating various dimensions of chigo (the chigo “title,” personal names, gender, sexuality, class, politics, and religiosity) to show the complexity of this cultural construct—the chigo as a triply liminal figure who is neither male nor female, child nor adult, human nor deity. A modern reception history of chigo monogatari follows, revealing, not surprisingly, that the tales have often been interpreted through cultural paradigms rooted in historical moments and worldviews far removed from the original. From the 1950s to 1980s, research on chigo was hindered by widespread homophobic prejudice. More recently, aversion to the age gap in historical master-acolyte relations has prevented scholars from analyzing the religious and political messages underlying the genre. Schmidt-Hori’s work calls for a shift in the hermeneutic strategies applied to chigo and chigo monogatari and puts forth both a nuanced historicization of social constructs such as gender, sexuality, age, and agency, and a mode of reading propelled by curiosity and introspection.