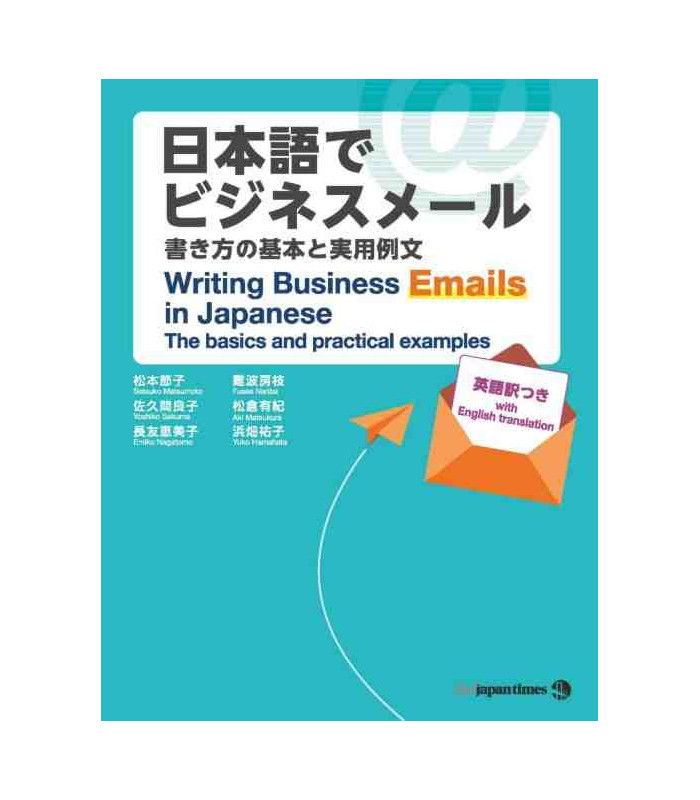 My thanks to Dr. Alison Miller who recommended this book on Twitter recently. Despite some practice over the past X years of graduate school, both in classes and in real-life communications with professors, archives, museums, and many others, beginning work last September (2019) in an office where I am the only person who’s not a native Japanese speaker has felt like being thrown in the deep end. I think I’ve figured things out to a great extent, the standard phrases and formats, but I am still frequently coming across situations where I don’t know the best way to navigate things politely and properly. Writing Business Emails in Japanese, published by the Japan Times in 2018, looks like it is going to be a big help.

While there are a number of other books along these lines, and I still religiously use the IUC guides that Dr. Miller mentions, flipping through this book it looks like it might be one of the most simply organized and helpful guides out of the few I’ve worked with.

The entire book is written bilingually in Japanese and English, making it easier to understand what situations a given set of phrases might be appropriate for, and what they each mean. The book starts with some basics about how to input each set of sounds in Japanese, which I suppose might be basics for most of us, but as someone who didn’t learn for many years how to use ‘x’ or ‘l’ to get a small kana character (e.g. typing ‘uli’ or ‘uxi’ to get うぃ), and who still struggles to remember to use ‘d’ to bring up characters like ぢ (di) and づ (du), these charts are a nice inclusion.

The text then goes on to introduce the basic structure of a formal email, and to break down each section. I may have been introduced to this in formal classes, but, then, since I haven’t taken a Japanese language class since 2008, I’m not sure how much we were really introduced to the style of business emails that’s standard today, as opposed to old-school letter writing. 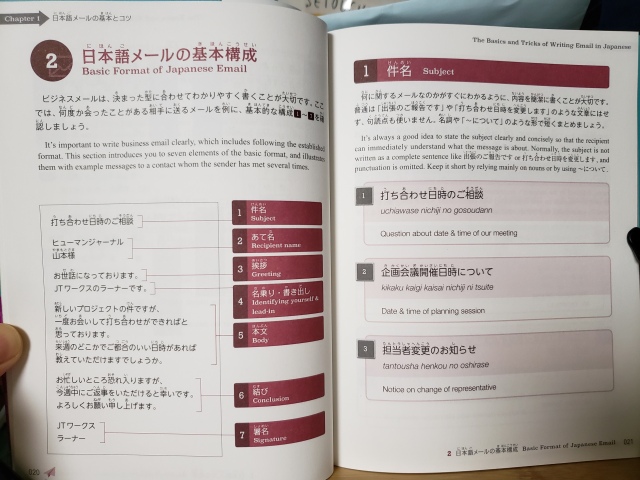 Simple things like the phrase 「ご担当者様」, for when you don’t know who to address an email to, are a huge help if you weren’t aware of that particular phrase. (I’ve always defaulted to 〇〇御中, filling in the institution or department for 〇〇, because I didn’t know of any alternative.) Similarly, after starting work here last September, I quickly learned the phrase お世話になっております。, which can also be used slightly less formally as お世話になります。, or in a slightly more elevated style as いつもお世話になっております。This is translated here as “We appreciate your support.” Seemingly, a very standard phrase to use in business emails; I’m still trying to figure out exactly when I should and should not be using it, but I suppose that’s going to differ from one workplace to another and one situation to another; any guide can only do so much to help with sorting that out.

In any case, the guide then takes you very briefly through introducing yourself, the body of the email, and the signature at the end. One thing I have noticed, as the book suggests as well, is that even though your email address and most likely your name will appear clearly in the Sender area at the top of the email, it’s extremely common for Japanese people to write their office/department/etc. and their name at the top of an email. Outside of the co-workers with whom I physically share an office (or, did, before we all shifted to working from home due to Covid), I think nearly everyone in my Institute nearly always writes something like「図書部 史料・図書サービスチームの濱田です。」or, somewhat less formally, during this current situation, 「伊藤＠在宅勤務です。」This isn’t necessarily something we do in English, so it’s good to know that that’s much more common and standard in business emails in Japanese.

Much of the rest of the book is devoted to useful expressions and brief guides to specific situations, from scheduling an appointment to invitations, to notifying the recipient about something. As wonderful as the IUC guides are, I cannot count the times that I’ve been in a situation other than the six or so they detail, so this looks like it will be very helpful. I am particularly appreciative of the inclusion of a significant number of sample phrases for admitting you made a mistake, asking to reschedule or to move a deadline, requesting something, confirming something, proposing something or proposing multiple options. Much like the way that I, and I presume many other grad students, have stressed out even in English with how to navigate the power/respect hierarchy when admitting a mistake to one’s advisor or other professors or suggesting or asking them about something, this comes up a lot in Japanese business emails. Or at least it does for me. So, I’m really glad to have sample sentences such as 「いただいたメールが迷惑メールに分類されており、気づくのが遅くなってしまいました。」 (“The message you sent went to the spam folder and I didn’t notice it until now”) and 「先ほどのメールに添付ファイルを付け忘れておりました。ファイルを添付して再送いたします。」(“I forgot to attach the file to the email I just sent. I will resend the message with the file attached.”) provided here directly.

The book also contains a few brief sections of “Tips for Writing Better Emails,” including small details you might or might not already be familiar with, such as that one should omit the “-sama” 様 when addressing someone by their title (e.g. 斎藤部長、not 斎藤部長様) or when using the phrase “kakui” 各位 to refer to everyone in a given department or division (e.g. 東洋研究所各位、not 東洋研究所各位様), and that it’s often considered polite to write out the people being cc’ed on the next line (e.g. CC: 赤嶺様・真栄田様). The guide also warns against using the wrong kanji, or the wrong version of someone’s name, e.g. 斎藤 vs. 斉藤 vs. 齋藤, or 佐藤つかさ先生, not 佐藤司先生.

These sections also include some useful polite/honorific phrases that we might have forgotten from our units on keigo, or might never have learned, such as the use of kisha 貴社 to refer honorifically to “your company” and heisha 弊社 to refer deferentially to your own company, as well as a few useful keigo verb phrases, such as 見ます vs. 拝見します; 見てください vs. ご覧ください; and 受けました vs. 拝受いたしました。

Of course, for those of us who are academics (or, I would imagine, journalists, translators, artists, etc etc), there will always be situations that are not in any business-oriented book. Emailing archives or museums, or private collectors, to ask about whether you can set up an appointment to view original materials, whether you even need an appointment, what the procedures are, explaining out your research reasons for wanting to view it, etc etc, are not in this book. But, even so, I thoroughly appreciate that, in the section for scheduling an appointment for example, the book does not simply lead you through a single set of standard set-phrases, but instead provides a range of options, from suggesting a meeting time directly, to offering a range of times, asking “can you let me know when’s a good time for you?”, stating that “any time is fine with me,” and so forth.

All in all, my thanks again to Dr. Alison Miller for sharing about this book on Twitter. I’m very glad to have purchased a copy, and anticipate it will be very useful. It retails for 1400円 plus tax (or 1540円税込み) at cover price; it does not appear to be available for order directly from Japan Times, but can be found on Amazon.jp, Rakuten, Kinokuniya, and elsewhere.

I am a scholar of Japanese & Okinawan history with a particular interest in the history of arts and culture, and inter-Asia interactions, in the early modern period. I have been fortunate to enjoy the opportunity to live in Okinawa for six months in 2016-17, and in mainland Japan on multiple occasions, including from Sept 2019 to now.
View all posts by Travis →
This entry was posted in study tools, textbooks and tagged books, business japanese, emails, keigo. Bookmark the permalink.