Book Announcement: Comfort Women: A Movement for Justice and Women’s Rights in the United States 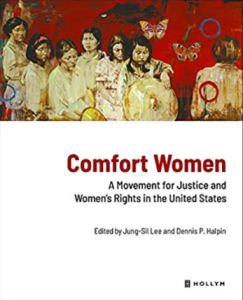 Comfort Women: A Movement for Justice and Women’s Rights in the United States

This new edited volume archives nearly thirty years of activism, records the achievements of the “comfort women” redress movement on American soil, and highlights the significant historical moments by members of the non-profit Washington Coalition for Comfort Women Issues (WCCW), its elected officers, congressional staff members, non-profit  organizations, scholars, and artists. Together with its many pages of primary resources and historical photographs, the volume also offers useful links to resources for future generations who wish to pursue the impact and legacies of the Korean “comfort women”.

During World War II, the Japanese Imperial Army forced young women and girls in occupied territories into sexual slavery. The purpose was to prevent rapes, sexually transmitted diseases, leaking of confidential information, and to provide “comfort ” to Japanese soldiers. This sexual servitude gave rise to the euphemistic label “comfort women. ” It is estimated there were between 50,000 to as many as 400,000 “comfort women ” throughout more than ten occupied countries including Korea, China, the Philippines, Thailand, Malaysia, the Dutch East Indies, Taiwan, Burma, and Vietnam. This dark period of Asian history remains hotly debated between the right-wing Japanese government and sympathetic groups of activists and feminists. Interestingly, this conflict found a new and unexpected battlefield on American soil and has become part of the discourse on human rights. “Comfort women ” represent something universally troubling: the endemic assault on the rights and ownership of a woman s body and the patriarchal systems that leave such transgressions unpunished. “Comfort women ” issues reflect the atrocities that continue to plague modern society today: rape, violations of human rights, sexual assault, sex trafficking, and more broadly, war-time traumas. What has made many sympathetic to this cause is not just the horrific experiences of these women, but also the realization that women’s rights and justice have not greatly improved since World War II. This book is dedicated to compiling and recording the tremendous efforts of diverse groups of people for the cause of the “comfort women ” in the United States for the last 28 years in hopes that readers can use and learn from these archived materials to prevent such atrocities in the future and to fight those battles today, where the voices of women in the past could not.

All orders from within the United States as well as from other countries should be directed to the Washington Coalition for Comfort Women Issues (WCCW) website:

Orders may also be sent to Amazon.com  and to Hollym International Corporation in Carlsbad, California.