Book Announcement: Marriage and Marriageability: The Practices of Matchmaking between Men from Japan and Women from Northeast China 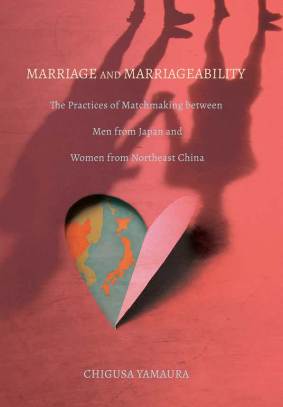 Marriage and Marriageability:
The Practices of Matchmaking between Men from Japan and Women from Northeast China

How do the Japanese men and Chinese women who participate in cross-border matchmaking—individuals whose only interaction is often just one brief meeting—come to see one another as potential marriage partners? Motivated by this question, Chigusa Yamaura traces the practices of Sino-Japanese matchmaking from transnational marriage agencies in Tokyo to branch offices and language schools in China, from initial meetings to marriage, the visa application processes, and beyond to marital life in Japan.

Engaging issues of colonial history, local norms, and the very ability to conceive of another or oneself as marriageable, Marriage and Marriageability rethinks cross-border marriage not only as a form of gendered migration, but also as a set of practices that constructs marriageable partners and imaginable marriages. Yamaura shows that instead of desiring different others, these transnational marital relations are based on the tactical deployment of socially and historically created conceptions of proximity between Japan and northeast China. Far from seeking to escape local practices, participants in these marriages actively seek to avoid transgressing local norms. By doing so on a transnational scale, they paradoxically reaffirm and attempt to remain within the boundaries of local marital ideologies.