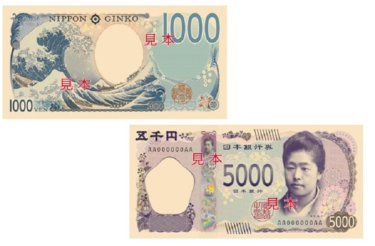 What’s on your country’s money? After traveling overseas, I always come back to the US thinking about how boring our own bills seem! And it appears that Japan is putting even more thought into new and exciting illustrations for their currency. Last year the Ministry of Finance revealed that they’ve got new designs for the 1000, 5000, and 1000 yen bills in the works, which are planned to be released in 2024.

Some of these changes will include an image of the famous Great Wave off Kanagawa, Umeko Tsuda (1864-1929), a leader in women’s education, and Eiichi Shibusawa (1840-1931), a well-known figure in Japan’s early financial development. Even the 500 yen coin will be getting an overhaul! If you want to check out the old and new designs, be sure to look through the Live Japan or Asahi news articles on it, which have more information on the historical figures being chosen. Happy Friday!