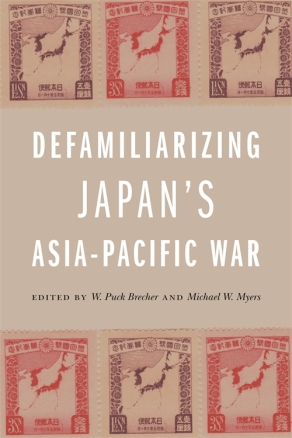 This wide-ranging collection seeks to reassess conventional understanding of Japan’s Asia-Pacific War by defamiliarizing and expanding the rhetorical narrative. Its nine chapters, diverse in theme and method, are united in their goal to recover a measured historicity about the conflict by either introducing new areas of knowledge or reinterpreting existing ones. Collectively, they cast doubt on the war as familiar and recognizable, compelling readers to view it with fresh eyes.

Following an introduction that problematizes timeworn narratives about a “unified Japan” and its “illegal war” or “race war,” early chapters on the destruction of Japan’s diplomatic records and government interest in an egalitarian health care policy before, during, and after the war oblige us to question selective histories and moral judgments about wartime Japan. The discussion then turns to artistic/cultural production and self-determination, specifically to Osaka rakugo performers who used comedy to contend with state oppression and to the role of women in creating care packages for soldiers abroad. Other chapters cast doubt on well-trod stereotypes (Japan’s lack of pragmatism in its diplomatic relations with neutral nations and its irrational and fatalistic military leadership) and examine resistance to the war by a prominent Japanese Christian intellectual. The volume concludes with two nuanced responses to race in wartime Japan, one maintaining the importance of racial categories while recognizing the “performance of Japaneseness,” the other observing that communities often reflected official government policies through nationality rather than race. Contrasting findings like these underscore the need to ask new questions and fill old gaps in our understanding of a historical event that, after more than seventy years, remains as provocative and divisive as ever.

Defamiliarizing Japan’s Asia-Pacific War will find a ready audience among World War II historians as well as specialists in war and society, social history, and the growing fields of material culture and civic history.