Book Announcement: A New History of Medieval Japanese Theatre: Noh and Kyōgen from 1300 to 1600 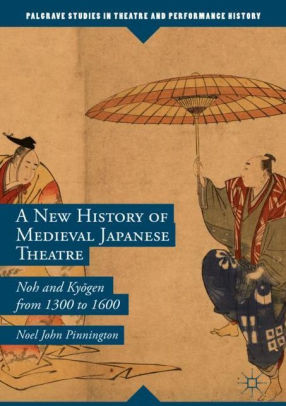 A New History of Medieval Japanese Theatre: Noh and Kyōgen from 1300 to 1600
Authors: Pinnington, Noel J.

This book traces the history of noh and kyōgen, the first major Japanese theatrical arts. Going beyond P. G. O’Neill’s Early Nō Drama of 1958, it covers the full period of noh’s medieval development and includes a chapter dedicated to the comic art of kyōgen, which has often been left in noh’s shadow. It is based on contemporary research in Japan, Asia, Europe and America, and embraces current ideas of theatre history, providing a richly contextualized account which looks closely at theatrical forms and genres as they arose.

The masked drama of noh, with its ghosts, chanting and music, and its use in Japanese films, has been the object of modern international interest. However, audiences are often confused as to what noh actually is. This book attempts to answer where noh came from, what it was like in its day, and what it was for. To that end, it contains sections which discuss a number of prominent noh plays in their period and challenges established approaches. It also contains the first detailed study in English of the kyōgen repertoire of the sixteenth-century.