Today’s online resource is The Gail Project: An Okinawan-American Dialogue, a collaborative public history project and exhibition that addresses the fascinating history of Okinawan-American relations in the years following World War II. Based out of the University of California, Santa Cruz, the project is led by Professor Alan Christy, Shelby Graham of the Mary Porter Sesnon Gallery, and Tosh Tanaka. 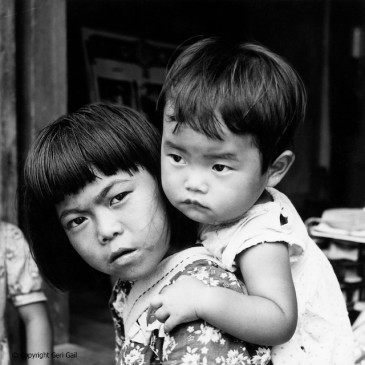 Photograph from The Gail Project.

Starting with a collection of photographs donated to the Special Collections at McHenry Library by Geri Gail, the daughter of an American army captain, Charles Eugene Gail, the photographs were taken by Charles Gail during the first years of the American occupation of Okinawa, 1952-1953.

Working with students to supplement the photograph collection, the site now includes various texts and official documents from the National Archives and seeks to incorporate oral histories of both American and Okinawan peoples along with each exhibition entry. The content is divided into two major sections, The Photos and The Documents.

The Photos features the Gail collection divided into several subsections, daily life and work, heritage, maritime life, people, and landscapes, offering diverse and intimate views of life in Okinawa during the period. All photographs are tagged with keywords so that browsers can jump to related material, and many of the photographs also feature the descriptive comments on the photos by Gail himself that were written on the back of the pictures.

The Documents includes military directives, maps of Japan and the Okinawa region, and other written materials such as newspaper articles relevant to the military presence at the time. The compilation of these and other materials reflects the project’s dedication to including research conducted by students who have been a part of The Gail Project since its inception.

The Gail Project has a large online presence, from reflective essays on the content by Christy to Twitter, Facebook, Instagram, and Tumblr pages that highlight the progress they’re making as well as new and interesting finds. If you want to listen to an excellent interview with Christy on the inception and process of conducting the project and its future development as they continue to produce content, you can also check out the first episode of the DH East Asia podcast. The Gail Project is an excellent example of how historical projects can reach beyond the pages of books and engage the public.

3 Responses to Resource: The Gail Project: An Okinawan-American Dialogue