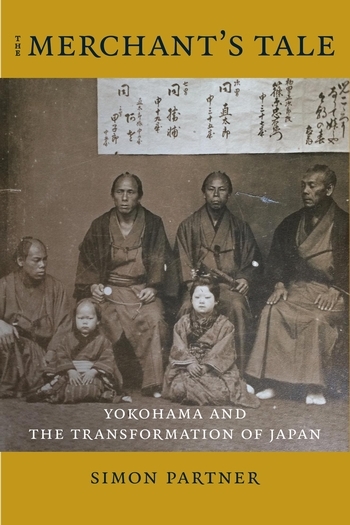 The Merchant’s Tale:
Yokohama and the Transformation of Japan

In April 1859, at age fifty, Shinohara Chūemon left his old life behind. Chūemon, a well-off farmer in his home village, departed for the new port city of Yokohama, where he remained for the next fourteen years. There, as a merchant trading with foreigners in the aftermath of Japan’s 1853 “opening” to the West, he witnessed the collapse of the Tokugawa shogunate, the civil war that followed, and the Meiji Restoration’s reforms. The Merchant’s Tale looks through Chūemon’s eyes at the upheavals of this period. In a narrative history rich in colorful detail, Simon Partner uses the story of an ordinary merchant farmer and its Yokohama setting as a vantage point onto sweeping social transformation and its unwitting agents. Chūemon, like most newcomers to Yokohama, came in search of economic opportunity. His story sheds light on vital issues in Japan’s modern history, including the legacies of the Meiji Restoration; the East Asian treaty port system; and the importance of everyday life—food, clothing, medicine, and hygiene—for national identity. Centered on an individual, The Merchant’s Tale is also the story of a place. Created under pressure from aggressive foreign powers, Yokohama was the scene of gunboat diplomacy, a connection to global markets, the birthplace of new lifestyles, and the beachhead of Japan’s modernization. Partner’s history of a vibrant meeting place humanizes the story of Japan’s revolutionary 1860s and their profound consequences for Japanese society and culture.