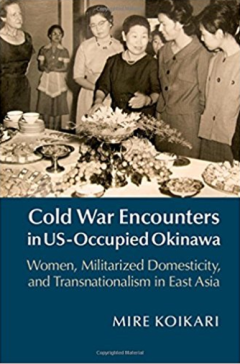 Cold War Encounters recasts the US occupation of Okinawa as a startling example of Cold War cultural interaction in which women’s grassroots activities involving homes and homemaking played a pivotal role in reshaping the contours of US and Japanese imperialisms. Drawing on insights from studies of gender, Asia, America, and postcolonialism, the book analyzes how the occupation sparked domestic education movements in Okinawa, mobilizing an assortment of women – home economists, military wives, club women, university students, and homemakers – from the US, Okinawa, and mainland Japan. These women went on to pursue a series of activities to promote modern domesticity and build multicultural friendship amidst intense militarization on the islands. As these women took their commitment to domesticity and multiculturalism onto the larger terrain of the Pacific, they came to articulate the complex intertwining of gender, race, domesticity, empire, and transnationality that shaped Cold War geopolitics.

3. “The World is Our Campus”: Domestic Science and Cold War Transnationalism between Michigan and Okinawa

4. Building a Bridge across the Pacific: Domestic Training and Cold War Technical Interchange between Okinawa and Hawaii

6. Cultivating Feminine Affinity and Affiliation with the Homeland: Grassroots Women’s Exchange between Mainland Japan and Okinawa