Book Announcement: The History Problem: The Politics of War Commemoration in East Asia 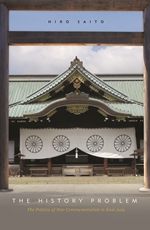 The History Problem: The Politics of War Commemoration in East Asia

Seventy years have passed since the end of the Asia-Pacific War, yet Japan remains embroiled in controversy with its neighbors over the war’s commemoration. Among the many points of contention between Japan, China, and South Korea are interpretations of the Tokyo War Crimes Trial, apologies and compensation for foreign victims of Japanese aggression, prime ministerial visits to the Yasukuni Shrine, and the war’s portrayal in textbooks. Collectively, these controversies have come to be called the “history problem.” But why has the problem become so intractable? Can it ever be resolved, and if so, how?

To answer these questions author Hiro Saito mobilizes the sociology of collective memory and social movements, political theories of apology and reconciliation, psychological research on intergroup conflict, and philosophical reflections on memory and history. The history problem, he argues, is essentially a relational phenomenon caused when nations publicly showcase self-serving versions of the past at key ceremonies and events: Japan, South Korea, and China all focus on what happened to their own citizens with little regard for foreign others. Saito goes on to explore the emergence of a cosmopolitan form of commemoration taking humanity, rather than nationality, as its primary frame of reference, an approach increasingly used by a transnational network of advocacy NGOs, victims of Japan’s past wrongdoings, historians, and educators. When cosmopolitan commemoration is practiced as a collective endeavor by both perpetrators and victims, Saito argues, a resolution of the history problem—and eventual reconciliation—will finally become possible.

Introduction
1 Cross-National Fragmentation, 1945-1964
2 The Growth of Transnational Interactions, 1965-1988
3 Apologies and Denunciations, 1989-1996
4 The Coexistence of Nationalism and Cosmopolitanism, 1997-2015
5 The Legacy of the Tokyo Trial
6 The Role of Historians in the History Problem
Conclusion