This is the first in a series of posts highlighting resources related to Okinawa. Building on a post from last year about the Okinawa Compact Encyclopedia, this series will touch upon online resources for learning more about Okinawan history, historical sites to visit, and Okinawan language, and resources for navigating life in Okinawa. 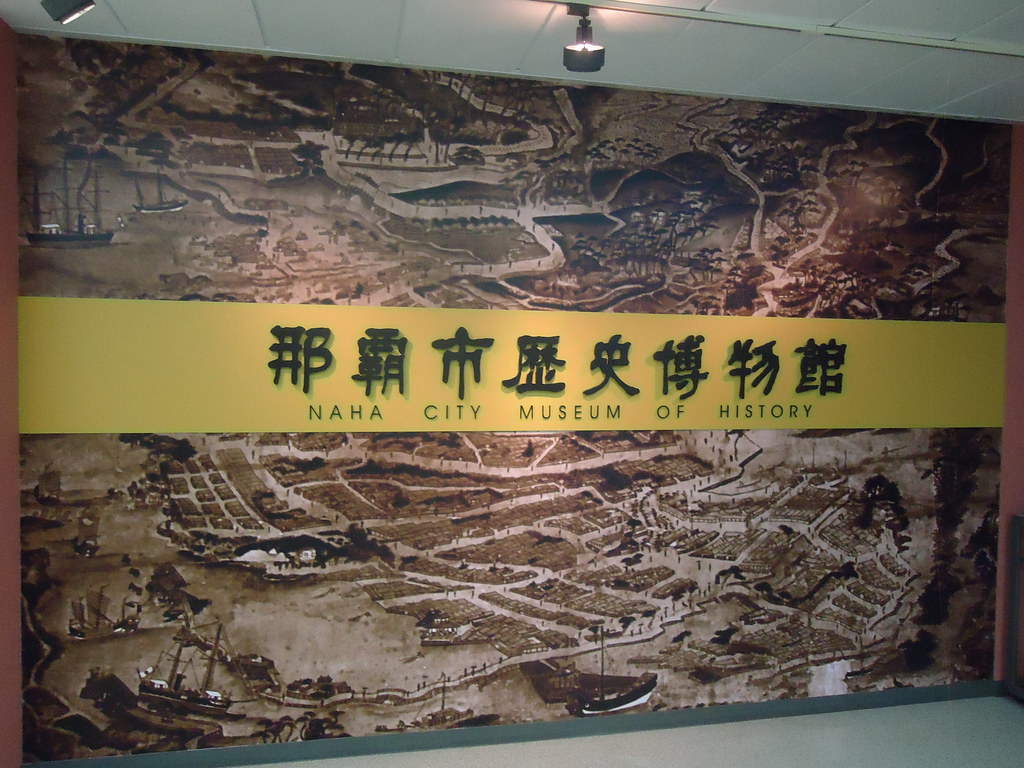 To begin, the Naha City Museum of History is a pretty incredible place. Its gallery space is quite small, and is tucked away on the 4th floor of the Palette Kumoji shopping center at Kenchômae in the Okinawan capital. But, don’t let the “city museum” name and appearance deceive you. The Museum is home to a massive collection of objects and documents, as well as a huge research library, and as I’ll touch upon a bit more below, the catalog of its holdings is easily accessible on the sleek website.

The highlights of the collection, from a museum visitor’s point of view, are the Historical Documents of the Shô Family Kings of Ryûkyû (Ryûkyû kokuô shô ke kankei shiryô 琉球国王尚家関係資料), a large group of documents, records, textiles, lacquerwares, swords, and the only surviving royal investiture crown, all of which together constitute a single “group” National Treasure. These objects are regularly rotated in and out of display in one gallery, while the museum uses the larger, neighboring space for exhibits on Okinawan history unlike anything I’d expect to see anywhere outside of Okinawa. I believe the last time I was there, the temporary exhibit was on prewar tourism and in particular the development of cruise lines, but other exhibits have covered topics ranging from the history of Naha City in poetry, to local festivals, the overthrow of the kingdom, post-war developments in tourism, and on and on. Though the exhibit catalogs are often quite thin, 15-20 page pamphlets, still, many of these are the best sources of information one can find on, for example, Naha’s bridges, or Naha’s scholar-aristocratic class, without turning to hefty & expensive academic tomes.

But the museum’s website goes even further, and does so much more. Firstly, many sections are available not only in Japanese, but also in English, Chinese, Korean, and Spanish. As one might expect, the site lists basic information about the museum (location, hours, upcoming exhibits), as well as lists of the museum’s publications. But it also includes a rather extensive “digital museum,” through which one can explore not only the museum’s collections of art objects, but also its archives of original historical documents, and library of some 33,000 secondary sources on Okinawa. I have yet to investigate accessing these archives or library in person, i.e. as a researcher, but even just searching online, I have found the Naha City Museum’s listings quite useful at times, right alongside those of CiNii, WorldCat, WebCat, and so forth, when trying to confirm that a book exists, to find out its author, year of publication, or the like. The listing for a book very often includes chapter titles, as well, which many other databases don’t, and which can be a lifesaver, when you’re trying to find essays in edited volumes, or just trying to figure out which topics a given book covers.

Returning to the other sets of archives, the collections include nearly 1,000 genealogies (kafu 家譜) of Ryukyuan scholar-aristocrat families, almost 20,000 historical photographs, and just under 1,500 other historical documents (komonjo 古文書), and I believe that’s not even counting those listed under several other collections, including the Shô Family Royal Materials already mentioned, and the Kabira Chôsei and Ie Udun collections.

As with the library listings, the vast majority of these archival pages are merely listings of basic collection information. Some actually provide a lot less information than I would have expected. For example, the record for one of the museum’s copies of the Ôshima hikki gives the “document code” and other collection information (so you can request the item from the archive, as a researcher visiting in person), the year and publisher of this modern reprinting, the number of pages, and some indication of the size and style of binding. It, surprisingly, says nothing of the original date or author (1762, Tobe Yoshihiro), or of the character or content of the item (the Ôshima hikki is a text by a Tosa samurai, recounting his encounters with a group of Ryukyuan officials who became shipwrecked or castaway in Tosa). Still, the sheer extent of the collections is incredible; I look forward to tackling the task of wading through them when I go to Okinawa to do my archival work for my PhD dissertation research next year.

There are also some number of objects for which images are available, and rather high-definition images, with a sleek, easy-to-use interface for zooming in and scrolling through them.

But, the museum’s website goes beyond its own collection, to include two more valuable resources – and despite the great extensiveness of the collection, it is for this reason that this website came to mind, in particular, to share here. First, there are a whole series of pages on the “History of the City, and of the Royal Court Culture” (王朝文化と都市の歴史). These include a lengthy chronology (年表) of significant events in Okinawan history; brief bios of every king of Okinawa/Ryukyu from the unification of the island under Shunten in 1187 to the overthrow of the kingdom during the reign of Shô Tai; and brief summaries of the history of the kingdom, the cities of Naha & Shuri within it, and the establishment of Okinawa prefecture (following the overthrow).

Lastly, and probably the bit I find the most exciting, the museum website includes an extensive list of officially recognized historical sites in the city, along with an embedded, interactive Google Map of all of them. If there’s an explanatory plaque at the site like the one below, placed there by the city (and in many cases, even if there isn’t a plaque), then the site is on this list. Many of the plaques are reproduced on the website, and some have additional information as well. You can browse through the list of sites by category (history, folk culture, historical figures, war sites, arts), or by location according to the former village/town/city, as Shuri, Mawashi, and Oroku were separate from Naha up until the modern period. This set of historical sites is a great resource in itself, without even visiting Okinawa in-person, as it includes so much information about the sites just on the webpage. I found this incredible useful, though, too, for planning out my touristy exploration of the city, as it lists out the modern street addresses of each of the sites, and often includes photos, making finding each site much easier. 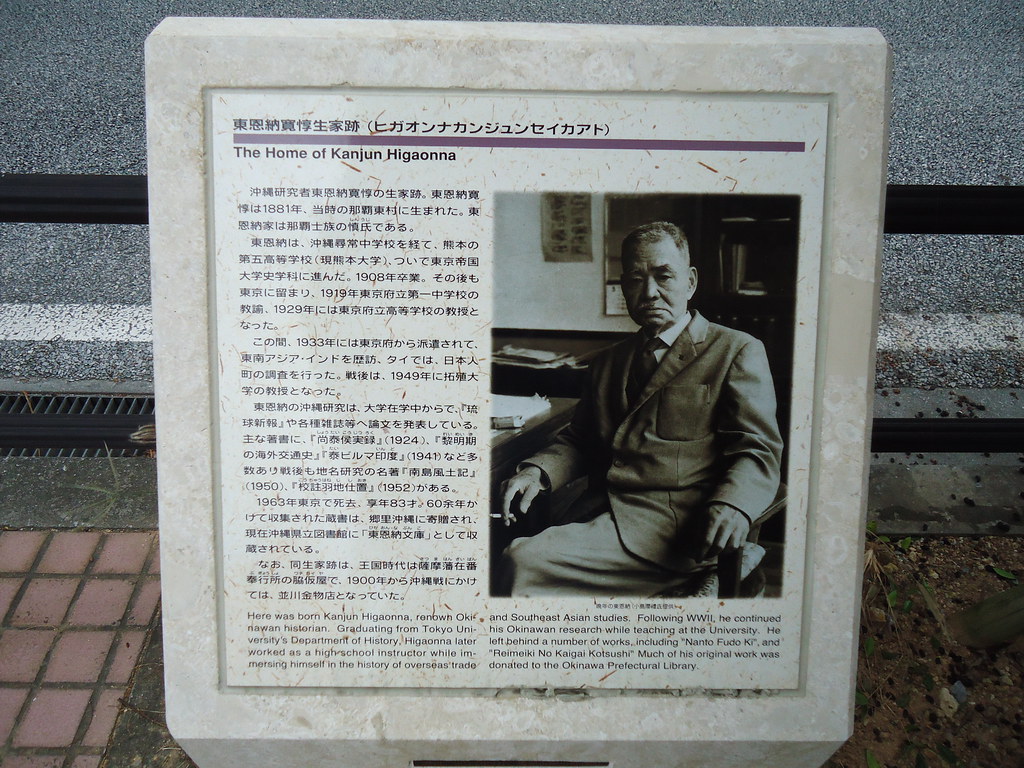 A plaque on the former site of the home of Higaonna Kanjun, one of the first pioneers of the modern field of Okinawa Studies.

I am a scholar of Japanese & Okinawan history with a particular interest in the history of arts and culture, and inter-Asia interactions, in the early modern period. I have been fortunate to enjoy the opportunity to live in Okinawa for six months in 2016-17, and in mainland Japan on multiple occasions, including from Sept 2019 to now.
View all posts by Travis →
This entry was posted in main posts, study tools, useful links and tagged museums, naha, naha city museum of history, Okinawa, research, resources, ryukyu. Bookmark the permalink.