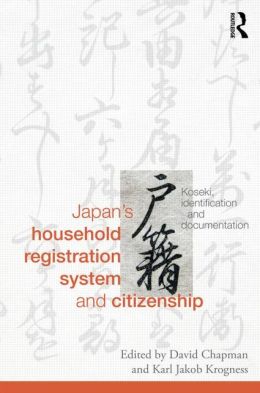 Japan’s Household Registration System (koseki seido) is an extremely powerful state instrument, and is socially entrenched with a long history of population governance, social control and the maintenance of social order. It provides identity whilst at the same time imposing identity upon everyone registered, and in turn, the state receives validity and legitimacy from the registration of its inhabitants. The study of the procedures and mechanisms for identifying and documenting people provides an important window into understanding statecraft, and by examining the koseki system, this book provides a keen insight into social and political change in Japan.

By looking through the lens of the koseki system, the book takes both an historical as well as a contemporary approach to understanding Japanese society. In doing so, it develops our understanding of contemporary Japan within the historical context of population management and social control; reveals the social effects and influence of the koseki system throughout its history; and presents new insights into citizenship, nationality and identity. Furthermore, this book develops our knowledge of state functions and indeed the nation state itself, through engaging critically with important issues relating to the koseki while at the same time providing a platform for further investigation. The contributors to this volume utilise a variety of disciplinary areas including history, gender studies, sociology, law and anthropology, and each chapter provides insights that bring us closer to a comprehensive grasp of the role, effects and historical background of what is a crucial and influential instrument of the Japanese state.

This book will be of great interest to students and scholars of Japanese history, Japanese culture and society, Japanese studies, Asian social policy and demography more generally.

Part III: The Present
10. The Koseki and Legal Gender Change, Shuhei Ninomiya
11. Sexual Citizenship at the Intersections of Patriarchy and Heteronormativity: Same-sex Partnerships and the Koseki,Claire Maree
12. Birth Registration and the Right to have Rights: The Changing Family and Unchanging Koseki, Vera Mackie
13. Officially Invisible: The Stateless (Mukokusekisha) and the Unregistered (Mukosekisha), Tien-shi (Lara) Chen
14. Challenging the Heteronormative Family in the Koseki: Surname, Legitimacy and Unmarried Mothers, Linda White