Book Announcement: Kokugaku in Meiji-period Japan: The Modern Transformation of ‘National Learning’ and the Formation of Scholarly Societies 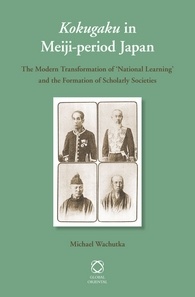 Kokugaku in Meiji-period Japan offers a new perspective on scholarly networks and the foundations of modern Japan. Utilizing never-explored original sources and with a unique focus on the persons involved, Michael Wachutka elucidates how kokugaku as a cornucopia of traditional knowledge played an important role in raising a new generation of truly ‘national’ citizens. Commonly perceived as a purely premodern Edo-period phenomenon, ‘national learning’ counterbalanced an excessive drive towards the Westernization of society in the process of nation-building and the formation of a new ‘modern’ identity. In addition to kokugaku activities in religious administration and higher education, Wachutka provides a compelling account of the organization and endeavours of three successive academic societies whose most prominent members served as a catalyst for kokugaku’s intellectual network in Meiji Japan.

Scholars and advanced students interested in modern Japanese history, religious administration, higher education, the formation and activities of intellectual networks, and aspects of continuation and change in the process of nation building.

1. Kokugaku at the Dawn of the Meiji Period

1.2. Two Sides of the Same Coin: The Jinmu-tennô Revival and New Foreign Relations

2.3. The Shift from Shinto as the State Religion to the Imperial Way as public Morality

3.1. The Early Stage of Meiji Kokugaku Academic Activities in Kyoto

3.2. Success and Conflicts at the Early Academic Institutions in Tokyo

3.3. The Gakushinsai, Increasing Antagonism and the Closing of the First University

4.1. The Founding of Tokyo University

4.3. The Institute for Research of the Japanese Classics Kôten kôkyûjo

5.2. The Aim of Establishing Yôyôsha

5.3. Monthly Meetings and the Journal Yôyôsha-dan

5.4. Retrospection as a Core Concern and the Transition to Specialized Scholarly Circles

6.1. The Aim of Establishing the Shigaku-kyôkai

6.2. The Opening Ceremony and the Subjects of Historical Study

6.3. The Inaugural Speech on Motives and Goals

6.5. Staff Changes and Broadened Interest in the Association’s Journal

6.6. An Almost Modern Discourse on History

7.1. The Aim of Establishing the Ôyashima-gakkai

7.3. The Society’s Journal and Expanding Membership

8.1. The Aim of Establishing the Ôyashima-gakkô and its Beginnings

8.2. The School’s Regulations and Curriculum

8.3. The Specialized Course on Poetry and Literary Texts

8.4. The School’s Teachers and Staff

8.5. Transition to the Second Semester and the Students at the Ôyashima-gakkô

8.6. Everyday Life at the Ôyashima-gakkô

8.7. Some Internal Problems, a Countrywide Expansion, and Long-term Success

9.1. Using Folktales and the Rise of ‘New Kokugaku’

9.3. Yamada Yoshio and the Zealous Nationalistic Use of Kokugaku

9.4. Emperor Shôwa’s Allusive Retrospection and the Post-War Interest in Kokugaku

Appendix I: The Members of Yôyôsha