Writing here at Shinpai Deshou still isn’t quite back on track yet, since a couple of our contributors are in the process of overseas and domestic moves from and within Japan, but we promise more great things next week! In the meanwhile, though this might be fun to me purely because I’m a cat-lover, for our Fun Link Friday here’s a neat little news clip on a kitten found (alive!) in the machinery under a Tokyo train this past week.

As the train sped down the line between Kanagawa prefecture and Tokyo, somebody reported hearing meowing sounds from underneath one of its cars. The train made an emergency stop at Kamata station, where workers found a 3-month-old kitten clinging to the space between the floor and the wheels.

The incident caused the train to halt for about 25 minutes at Kamata station, holding up a total of 15 trains. The delay impacted the commutes of about 23,000 people.

I can totally get behind a train service that is willing to affect 23,000 commuters to save a kitten!

Also, Japan Probe has posted information for Japan residents (Japanese speakers only, it’s assumed) who can help out by adopting pets evacuated from the earthquake/tsunami disaster areas. 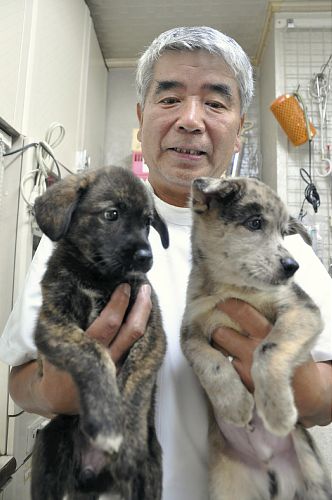 The Yomiuri Shimbun reports that the Baba Animal Hospital in Kawasaki city (near Tokyo) is looking for people willing to adopt pets that used to live in the Fukushima Daiichi exclusion zone. Some of the pets hade been completely abandoned, while others have been given to animal welfare facilities by reluctant owners who no longer had the ability to care for them.

If you know anyone in Japan looking to adopt/host these adorable pets, be sure to check out the Japan Probe article for full details!

Have a great weekend!