FLF: Above and beyond the call of origami

Short but sweet, this week’s Fun Link Friday speaks for itself with images like the one below. Thought you knew origami? Think again!

The art of origami is beautiful and fascinating, especially to those of us who do not fully comprehend the mysteries of paper folding. A more in depth study of origami leads to an even deeper appreciation of what is often just considered to be a craft learned by rote or one just for children. Akira Yoshizawa (1911-2005) is considered to be the Father of Origami as an art form. He invented the “wet folding” technique that allows for smooth curves in folded paper which gives the origami a more sculptural look. 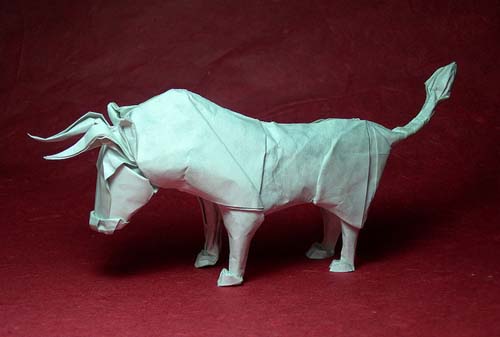 This technique, along with Yoshizawa’s continual innovation into the different forms origami figures can take, has led to origami being seen in a different light. Many artists have since followed the late Yoshizawa’s example and have pushed the boundaries of what folded paper can become. This art form is sometimes referred to as “extreme origami.”   In the case of the OrigaMIT club at MIT and artists like Peter Engel and Robert Lang, origami has gone far beyond your standard paper cranes and developed into a more intricate mental and physical exercise than one might even think possible.

Here’s an article on MIT’s Origami Club, including a great video about their work:

A link to the Amazon page for Peter Engel’s book:

Origami: From Angelfish to ZenContains 24 Projects

And Where Art and Science meet: Robert Lang’s origami:

Other website resources for origami that include both videos, diagrams, models, and more are Origami Tube and Origami Database. Check them out for some amazing projects to do yourself or share with others!

2 Responses to FLF: Above and beyond the call of origami