Bento have hit the states! Ready to make your own?

Here’s a brief history of and some great resources for getting started on bento-making, whether it’s in Japan or here in America.

Bento is the Japanese version of a packed lunch, typically taken to work and school by adults and children as a convenient and nutritious meal. Traditionally, the meal is divided into two parts: one half of the box is filled with rice, while the other half will be filled with a variety of accompanying foods, such a vegetables, fish, eggs, or meat.

It’s not uncommon for the person who prepares the bento to make it while they are preparing a larger main meal, perhaps dinner, and choose foods that will stay fresh the longest and will be good to eat the next day. I know what you’re thinking: leftovers. However, what makes a Japanese bento stand out from the American packed lunch is the presentation of the food in an aesthetically pleasing manner. The Japanese truly know that people eat with their eyes first. Here are a few examples of rock star bentos: 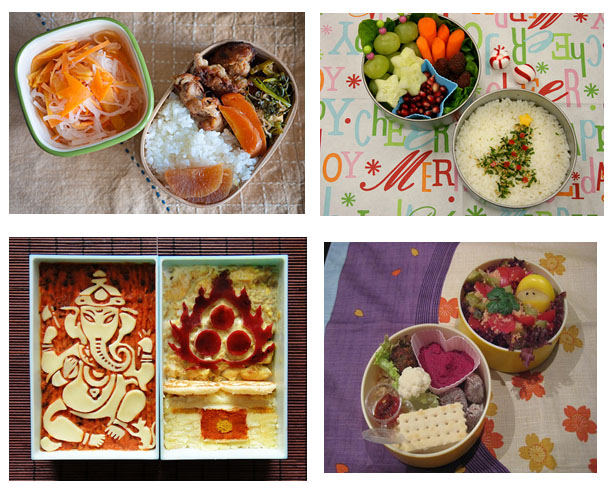 The word “bento” (bentou 弁当) is said to have originated from the 16th Century military commander, Oda Nobunaga (1534-1582) who fed the large numbers of people that inhabited his castle by handing out simple meals to each individual. The word was created to describe the small convenient meal. Nobunaga did not begin the trend; he merely solidified it as part of Japanese culture. Bento can be traced as far back into Japanese history as the 5th Century, when people spent all day working away from the home needed something they could prepare quickly to take with them as they traveled.

In Japanese literature, Ise Monogatari’s Tales of the Ise contains illustrations of people eating dried rice during trips.  The meals they took were generally based around a staple diet of rice. However, these meals would vary based on the foods that were available and the region that they lived in. Nihon Shoki’s historical record Chronicles of Japan mentions how falconers would use feed sacks to carry their lunch when they went hawking.

During the Edo period (1603-1868), people took bento as a meal during outdoor excursions or to the theatre.  Makunouchi bento (bento served during a specific interval in the play featuring rice balls sprinkled with sesame seeds and assorted side dishes) first appeared during this period. In this era, bento was served less as a necessity and more as a part of leisure. After that, bento served on special occasions evolved into a specialized, sophisticated art form.

The Meiji period (1868-1912) was a period of immense modernization and industrialization for Japan. With the Japanese railway, Ekiben (bento sold at train stations) first appeared around 1885. Commuting to employment became an important part of many people’s lives. Ekiben consisted of rice balls with pickled plum inside (umeboshi).  Ekiben can still be found at train stations to this day.

Today, bento is as popular as ever. Ready-made bento can be found in grocery stores, convenience markets, and department stores. Restaurants and shops regularly offer bento as a take-out option.  Different ethnic varieties of bento can be found as well featuring Western, Korean, and Chinese dishes.

In the United States, bento has hit the main stream. Thanks to a New York Times post, interest in bento has taken off.  It’s no surprise that the number one and three Japanese cookbooks on Amazon.com is bento related. The Times reports that there are a number of reasons why bento is now big in the States.  For some parents, it’s the belief that if their child’s food looks like something they recognize, they’ll eat it. For dieters, it allows them ability to better control their portions. The preparation of food allows some people a pleasant artistic distraction, to make their lunch look pretty, and to indulge in their love of Japanese culture. For students, it lets them to consume a balanced diet while on a budget.

Bento blogs are also extremely popular.  Many blogs that I look at regularly for inspiration are:

Check out Maki’s Top Ten Rules for Bento on JustBento.com for details.

The most important thing for me about Bento? Have fun. It translates well into the food.

For more information on bento, please check out the following links:

Lucks, Eva (2001). Eating our way through Japanese history: A brief study of the obento. Retrieved from http://artsci.wustl.edu/~copeland/obento.html.

(Check out the bibliography for even more resources.)

3 Responses to Bento have hit the states! Ready to make your own?