To complement our Japanese food and drink blog review by Jen, here is an announcement for a new book related to Japanese food coming out soon: Japanese Foodways, Past and Present. Whether you’re a Japanese food historian, connoisseur, or just love the stuff, this book is definitely worth a look! 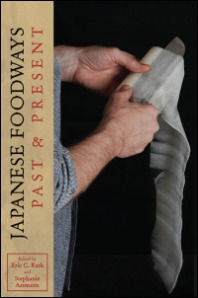 Spanning nearly six hundred years of Japanese food culture, Japanese Foodways, Past and Present considers the production, consumption, and circulation of Japanese foods from the mid-fifteenth century to the present day in contexts that are political, economic, cultural, social, and religious.  Diverse contributors-including anthropologists, historians, sociologists, a tea master, and a chef-address a range of issues such as medieval banquet cuisine, the tea ceremony, table manners, cookbooks in modern times, food during the U.S. occupation period, eating and dining out during wartime, the role of heirloom vegetables in the revitalization of rural areas, children’s lunches, and the gentrification of blue-collar foods.

Framed by two reoccurring themes-food in relation to place and food in relation to status-the collection considers the complicated relationships between the globalization of foodways and the integrity of national identity through eating habits. Focusing on the consumption of Western foods, heirloom foods, once-taboo foods, and contemporary Japanese cuisines, Japanese Foodways, Past and Present shows how Japanese concerns for and consumption of food has relevance and resonance with other foodways around the world.

For further information and to order: http://www.go.illinois.edu/f10rath

Image from University of Illinois Press

1 Response to Book announcement: Japanese Foodways, Past and Present