The harvest season is long gone, but the fun still remains! All across Japan, farmers have been engaging in a form of agricultural art: rice field art.

The first to pioneer this scene is the village of Inakadate, which has been doing rice field art since 1993. Other areas, such as Yonezawa in Yamagata prefecture and Nishio, in Aichi, have followed in kind. Originally conceived as a way for the small town of Inakadate to breathe new life into the atmosphere and beauty of their town, what began as simple designs has flourished into large-scale masterpieces of rice cultivation.

In 1997, Akio Nakayama, head of the rice planting project, said,

“In 1981, when we did construction work for a new road, we dug up some rice paddies that archaeologists dated as being about 2,000 years old. That impressed us local people a lot, because we realized how long people have been growing rice in this place. So then we thought that we had to do something involving rice to revitalize this area — and that was the origin of this project.”

So what sort of images do the farmers put in their fields? Everything from masterpieces of Japanese art…

Farmers have to be careful about when and how they plant different varieties of rice to ensure that everything grows evenly and the picture becomes visible. The standard rice, tsugaru-roman, is green, and varieties of white, yellow, brown, and purple are ancient strains of rice buds. 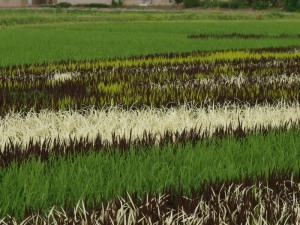 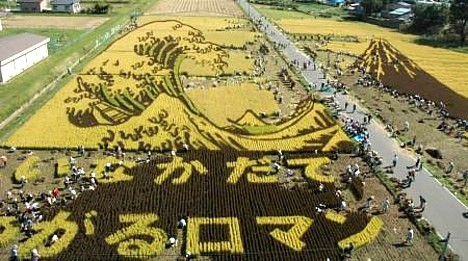 If you have a chance to check out these amazing pieces of agricultural art while in Japan, be sure to do so while they’re at their peak in their best colors, because come September, the annual harvest begins and the pictures will be gone!

To see some past pictures of rice field art from Inakadate, check out their website here. There is also a bunch more pictures from the source links below. Be sure to check them out and look out for new pics next year!