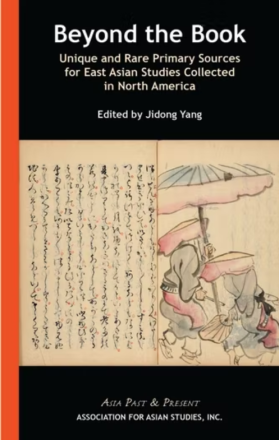 Beyond the Book: Unique and Rare Primary Sources for East Asian Studies Collected in North America
Edited by Jidong Yang

Most of the materials discussed are in a non-book format, such as archives, maps, prints, photographs, motion pictures, sound recordings, diaries, correspondence, posters, and unofficial publications.

Beyond the Book not only reveals many interesting and forgotten stories in the two centuries of cultural exchanges between East Asia and North America, it also provides fresh clues for East Asian studies scholars in their search for important research materials.

For those who have visited Japan, miniature models are nothing new. From our favorite plastic ramen bowls to recreations of historical buildings in museums, gazing on tiny versions of the world instill in us a sense of wonder.

Earlier this month, Colossal highlighted the work of Christopher Robin Nordstrom, who has been taking the miniature world of Japan to a whole new level. Focusing on the everyday, he’s recreating the spirit of everyday life in Tokyo, with small-scale models of police booths, hair salons, shop fronts, and other sites that remind us of both the charm and the grime of Tokyo’s urban landscape.

Read all about these projects at the original article or jump right to Nordstrom’s instagram to see not only finished products but his work in progress as it comes to life!

Book Announcement: Church Space and the Capital in Prewar Japan

Christians have never even constituted one percent of Japan’s population, yet Christianity had a disproportionately large influence on Japan’s social, intellectual, and political development. This happened despite the Tokugawa shogunate’s successful efforts to criminalize Christianity and even after the Meiji government took measures to limit its influence (after decriminalizing it out of diplomatic necessity). From journalism and literature, to medicine, education, and politics, the mark of Protestant Japanese is indelible. Herein lies the conundrum that has interested scholars for decades. How did Christianity overcome the ideological legacies of its past in Japan? How did Protestantism distinguish itself from the other options in the religious landscape like Buddhism and New Religions? And how did the religious movement’s social relevance and activism persist despite the new government’s measures to weaken the relationship between private religion and secular social life in Japan?

In Church Space and the Capital in Prewar Japan, Garrett Washington responds to these questions with a spatially explicit study on the influence of the Protestant church in imperial Japan. He examines the physical and social spaces that Tokyo’s largest Japanese-led Protestant congregations cultivated between 1879 and 1923 and their broader social ties. These churches developed alongside, and competed with, the locational, architectural, and social spaces of Buddhism, Shinto, and Japanese New Religions. Their success depended on their pastors’ decisions about location and relocation, those men’s conceptualizations of the new imperial capital and aspirations for Japan, and the Western-style buildings they commissioned. Japanese pastors and laypersons grappled with Christianity’s relationships to national identity, political ideology, women’s rights, Japanese imperialism, and modernity; church-based group activities aimed to raise social awareness and improve society. Further, it was largely through attendees’ externalized ideals, experiences, and networks developed at church but expressed in their public lives outside the church that Protestant Christianity exerted such a visible, surprising influence on modern Japanese society.

This groundbreaking history offers answers to longstanding questions about Protestant Christianity’s reputation and impact, but also goes further. It importantly uses a new space-centered perspective to focus attention on Japanese agency in the religion’s metamorphosis and social impact, adding a fresh narrative of cultural imperialism.

Every June and July, the intensive summer Japanese Workshop helps students develop their linguistic and cultural competency rapidly and effectively through live online instruction, extracurricular activities, authentic materials, and real-time interactions with instructors and presenters from Japan. Classes are conducted primarily in Japanese and focus on the rapid development of practical communication skills.

Although virtual reality promises to immerse a person in another world, its true power lies in its ability to sever a person’s spatial situatedness in this one. This is especially clear in Japan, where the VR headset has been embraced as a way to block off existing social environments and reroute perception into more malleable virtual platforms. Is immersion just another name for enclosure?

In this groundbreaking analysis of virtual reality, Paul Roquet uncovers how the technology is reshaping the politics of labor, gender, home, and nation. He examines how VR in Japan diverged from American militarism and techno-utopian visions and became a tool for renegotiating personal space. Individuals turned to the VR headset to immerse themselves in three-dimensional worlds drawn from manga, video games, and genre literature. The Japanese government promised VR-operated robots would enable a new era of remote work, targeting those who could not otherwise leave home. Middle-aged men and corporate brands used VR to reimagine themselves through the virtual bodies of anime-styled teenage girls. At a time when digital platforms continue to encroach on everyday life, The Immersive Enclosure takes a critical look at these attempts to jettison existing social realities and offers a bold new approach for understanding the media environments to come.

Through extensive use of primary resources and fieldwork, this detailed study examines overseas Shinto shrines and their complex role in the colonization and modernization of newly Japanese lands and subjects.

Shinto shrines became one of the most visible symbols of Japanese imperialism in the early 20th century. From 1868 to 1945, shrines were constructed by both the government and Japanese migrants across the Asia-Pacific region, from Sakhalin to Taiwan, and from China to the Americas. Drawing on theories about the constructed nature of the modern categories of ‘religion’ and the ‘secular’, this book argues that modern Shinto shrines were largely conceived and treated as secular sites within a newly invented Japanese secularism, and that they played an important role in communicating changed conceptions of space, time and ethics in imperial subjects.

Providing an example of the invention of a non-Western secularity, this book contributes to our understanding of the relationship between religion, secularism and the construction of the modern state.

How can digital preservation needs meet photographic technology and exhibition? Starting in 2018 Canon (yes, as in Canon camera!) embarked on the Tsuzuri Project, which brought their technical expertise in high resolution images and video to the work of National Center for the Promotion of Cultural Properties. The result has been creating a variety of high-res facsimiles of distinctive Japanese artworks.

Their project website discusses the overall project, features historical and material information on the works, and showcases dozens of the gorgeous paintings, screens, and more from the Heian to Edo periods. There’s also a series of videos that introduce many of the works and the process of photographing these important cultural assets (see the example below).  If you’re currently in Japan you’ll also find info on where to view many of these objects currently on display. Happy viewing!

Book Announcement: The Meiji Japanese Who Made Modern Taiwan 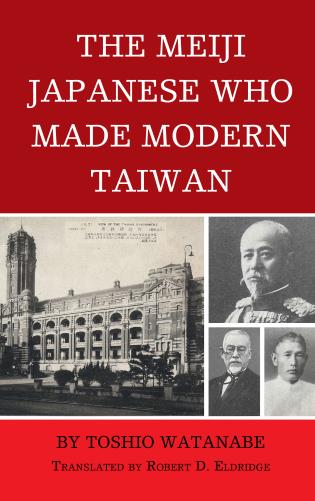 The Meji Japanese Who Made Modern Taiwan describes the story of Japan’s involvement and administration of Taiwan in the pre-war era, with a focus on the period from 1895, when Taiwan was made a part of the Japanese Empire, to 1945, when the Pacific War ended. It introduces the policies pursued and equally important, the personalities, philosophies, and ambitions of the administrators, engineers, and technicians behind those policies. In particular, the unique thinking, leadership styles, and contributions of Kodama Gentaro, Goto Shinpei, Hatta Yoichi, Iso Eikichi, and Sugiyama Tatsumaru, among others who contributed to the development of modern Taiwan, are introduced in great detail. Their accomplishments remain with Taiwan today, which helps explain the extremely close relationship between Taiwan (officially known as the Republic of China) and Japan maintain today.

If you’ve ever visited an art museum and found yourself looking as closely at the mountings of beautiful hanging scroll paintings as the works of art themselves, then we’ve found the procrastination tool for you!

The Kyoto Mounting Society 京都表具協同組合 has created a digital interface known as the Hanging Scroll Online Simulator 掛け軸オンラインシミュレーター. From their virtual creation page you can choose formats, colors, patterns, fabric types, and even model paintings to create (and download!) your own virtual hanging scroll.

Art historians, especially, will likely enjoy nerding out over being able to peruse the technical vocabulary and color labels for the components of the scroll, but even if your Japanese is limited, it’s a lot of fun to explore the different design possibilities! Be sure to check it out.

Book Announcement: Archaeology and History of Toraijin: Human, Technological, and Cultural Flow from the Korean Peninsula to the Japanese Archipelago c. 800 BC–AD 600

Archaeology and History of Toraijin: Human, technological, and cultural flow from the Korean Peninsula to the Japanese Archipelago c. 800 BC–AD 600 explores the fundamental role in the history of the Japanese archipelago played by Toraijin – immigrants mainly from the Korean Peninsula – during this formative period. The arrival of immigrant rice-agriculturalists from the peninsula in the early first millennium BC was the first of three major waves of technological transfer between the continent and the islands. The second brought bronze and iron-working to the archipelago around the 4th century BC, and the third brought elite crafts and administrative technology as well as Confucianism and Buddhism in the 5th and 6th centuries AD.