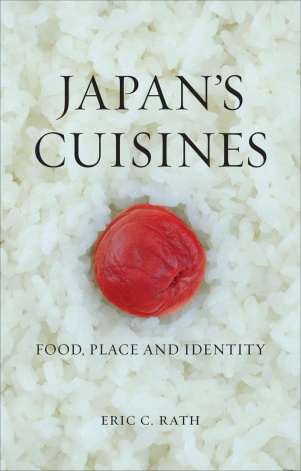 Cuisines in Japan have an ideological dimension that cannot be ignored. In 2013, ‘traditional Japanese dietary cultures’ (washoku) was added to UNESCO’s Intangible Cultural Heritage list. Washoku’s predecessor was “national people’s cuisine,” an attempt during World War II to create a uniform diet for all citizens.
Japan’s Cuisines reveals the great diversity of Japanese cuisine and explains how Japan’s modern food culture arose through the direction of private and public institutions. Readers discover how tea came to be portrayed as the origin of Japanese cuisine, how lunch became a gourmet meal, and how regions on Japan’s periphery are reasserting their distinct food cultures. From wartime foodstuffs to modern diets, this fascinating book shows how the cuisine from the land of the rising sun shapes national, local, and personal identity.

Orders can be placed through the University of Chicago Press: http://press.uchicago.edu/books.html